FREE WEBINAR: Business giving and volunteering
What nonprofits and businesses NEED to know

According to Giving Australia 2016, our largest national analysis of giving and volunteering, Australian businesses are giving more to charity than ever before. In fact partnering with nonprofits to generate positive social impact is becoming more embedded in how Australian enterprises of all sizes do business each and every year.

So what does this mean for YOUR nonprofit or business?

At this free webinar you will learn:

Can’t attend in real time? You should still register; all registrants will receive a recording of the webinar.

with input from the Australian Centre for Philanthropy and Nonprofit Studies and the Department of Social Services.

HAVE A BURNING QUESTION?
We would love to hear from you! Forward your questions to acpns@qut.edu.au ahead of time and we will endeavour to answer them live at the webinar.

The following data has been extracted from the Giving Australia 2016 Business giving and volunteering report. The full report is available for free download.

The qualitative data indicates that giving by business has evolved since 2005 to be embedded in the strategies of the largest businesses in Australia and that most businesses of all sizes were seeking to generate a positive social impact from what they gave.[1] 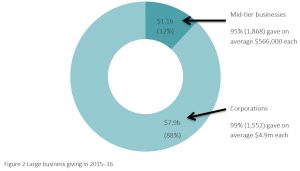 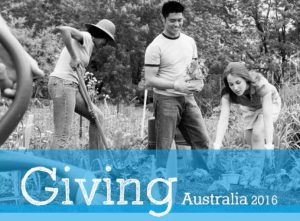 The following data has been extracted from the Giving Australia 2016 Individual giving and volunteering report. The full report is available for free download.

Through the Individual giving and volunteering survey, it was estimated that in the 12 months prior to interview in 2016, 14.9 million Australians aged 18 or older (80.8% of the adult population) gave a total of $11.2 billion to charities and nonprofit organisations (NPOs). Those giving gave an average of $764.08 each, while the median amount donated was $200 per donor.

In addition to donations, in 2016, individuals gave an estimated $1.3 billion to NPOs through events and ‘charity gambling’.[1] An estimated 9.2 million people, or 49.7% of adult Australians, supported NPOs in this way, contributing an average of $149.42 annually. By far the most popular of these methods of giving was charitable gambling with 45.2% of adult Australians purchasing a raffle ticket in the year prior to interview. Most (88.5%) providing support in this way also made donations.

Over the year prior to interview in 2016, an estimated 8.7 million people or 43.7% of the adult population, gave 932 million hours of their time as volunteers to charities and NPOs, an annual average of 134 hours each (or 2.5 hours per week). The median for volunteering hours was 55, half volunteering more and half less than this amount in the year.

Comparisons with other data sources

In Giving Australia 2005, it was estimated that a higher percentage – 86.9% of the adult population – made a donation, totalling $5.7 billion (equivalent to $7.5 billion in 2016 dollars). The Australian Taxation Office (ATO) annual tax-deductible giving data indicates a fairly constant percentage of people claiming deductions for donations since 2005, while the average donation has risen, except for the years immediately after the 2008 Global Financial Crisis.