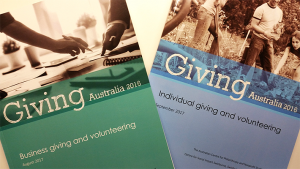 Everyday Australians gave $12.5 billion and 932 million hours to helping others and businesses gave $17.5 billion and more than half managed a workplace volunteering program in 2015-16, according to latest data coming out of Giving Australia 2016.

Giving Australia 2016 lead researcher and Director of QUT’s Australian Centre for Philanthropy and Nonprofit Studies (ACPNS), Associate Professor Wendy Scaife said people who volunteered and donated gave, on average, almost twice as much ($1017.11) as those who donated only money ($536.69).

“It is heartening to see that of the 43.7 per cent of Australians who volunteer, 38.2 per cent of those who responded to the annual survey donate both time and money,” Professor Scaife said. “And, while fewer people are giving, they’re giving more as the average donation has increased. Similarly, the percentage of people volunteering and the hours volunteered have both increased over the past decade”. (Forty-one per cent in 2005 versus 43.7 per cent in 2016; 132 hours on average in 2005 versus 134 hours in 2016.)

As for Australian businesses, the data is equally optimistic. The business report cites a trend towards businesses of all sizes encouraging giving and volunteering through the workplace.

“The increase in workplace volunteering is bucking the trend in the US, where the incidence of volunteering through the workplace has plateaued in recent years,” Professor Scaife said. “In fact, giving by businesses to charity is far more embedded in businesses’ ethical and social imperatives now than 10 years ago.”

The full reports can be freely downloaded via the Prime Minister’s Community Business Partnership research projects website, along with previous Giving Australia 2016 reports.

Further reading: There’s cause for celebration and concern in how Australians are giving to charity | The Conversation